A foundation since 2016, United Way Spain believes that « Sólo un esfuerzo común logra el bien común. » that is: Only a collective effort will lead to the common good.

In Spain today, almost 25.8% of the youth is neither studying nor working, 4 out of 10 are overweight, 10% of the families cannot pay at least one commodity each month, and 20% of the elderly live in solitude.

In response to these dramatic issues, and in partnership with civil organizations, American and European corporate leaders, such as Airbus, Lenovo, Lilly or John Deere, universities and volunteers, United Way Spain develops innovative approaches and programs in Education, Income and Health.

One of United Way Spain’s contributions to the common good is the Flying Challenge (aka Youth Challenge), a joint initiative of the Airbus Foundation and United Way that in Spain have been joint by John Deere. This global endeavor is a year long effort to offer students about their alternative education paths, train them in entrepreneurships, and accompany them as they make their first career choices. We know that high-school students who are informed, trained and accompanied, are more likely to remain at school.

The project is made possible thanks to the commitment of corporate volunteers who act as classroom mentors during the school year and as professional role models in the annual careers fairs. Our efforts deliver results: in 2016, 50% of the students improved their grades, 64% of them find new employment opportunities, and 84 % gain a better understanding on alternative training options.

We also know that IT, if properly used, is an excellent tool to achieve school success and advance social integration. That is why, in partnership with Lenovo and Save the Children, we equip after-school centers for children at risk of social exclusion and, with the support of corporate volunteers, offer young kids the expertise they need for the wise use of the donated equipment.

And while we see the value of investing in the future generations, United Way Spain also treasures the wellbeing of our old citizens. With the support of the Lilly Foundation, United Way Spain, in coordination with the health authorities and the support local of civil organizations, offers weekly companionship to aged citizens living in solitude.

United Way Spain works with local and international NGOs such as YMCA, Cadigenia, Ashoka, Save the Children, Desarrollo y Asistencia and others, with national and international corporations, public institutions, corporate volunteers and private citizens.

We are all about bringing together the efforts of many for the common good of all.

On Monday, May 20th, Banco Santander presented the XI edition of Social Projects. United Way Spain was selected as one of the 10 winning organizations and received a € 45,000 prize. 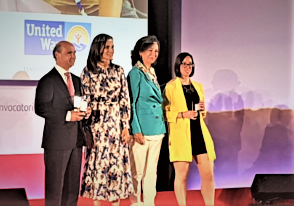 The project that won the award is MenCía, Mayores en Compaña; United Way Spain presented to this call a project with the entity “Adopta un abuelo”, which offers to connect young students to elderly people who are experiencing loneliness, all through an app, it connects generations.

The Latest from Spain

We use cookies on this site to enhance your user experience.

By clicking any link on this page you are giving your consent for us to set cookies.

OK, got it Give me more info